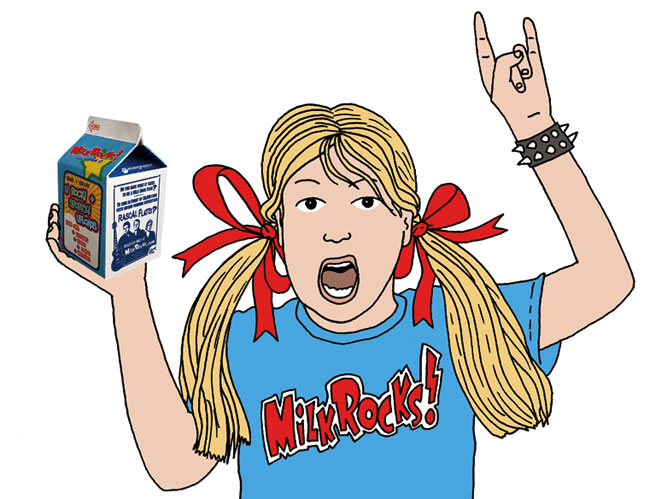 This past July, the Federal Trade Commission handed over to Congress its 120-page report on the subject of marketing food to children and adolescents. Among other things, it confirmed what you’ve already been noticing in grocery stores for years: the proliferation of kid-friendly characters who have leapt from pop-culture entertainment onto product packaging. Shrek and SpongeBob and Spider-Man shill for everything: breakfast cereal and cookies, macaroni and cheese and snack crackers. The potential for criticism at a time of rising concern about childhood obesity seems obvious enough.

Just as obvious, however, are the mutual marketing benefits of such team-ups – and not just for junk food. Or so it seemed to Richard Long when the liquids-packaging division of a paper-company client of his ad agency created a mascot named Rudy the Raccoon. Rudy was meant to appear on milk cartons sold in school cafeterias. He was cute and all, but he was unconnected to anything besides the packaging he appeared on. “If you’re going to try to influence kids to exercise or drink more milk, or read, or all those positive things,” Long says, “you should really be using properties that they actually relate to.”

Long focused on a new venture, called Milk Media, devoted to that proposition. As the Milk Media Web site puts it, “We introduced the concept of branded cartons to forge relationships between sponsors who had characters that kids really cared about as a more effective tactic to make milk Cool for Kids.’ ” His first deal involved getting the Disney character Doug onto cartons. According to Milk Media, milk consumption in participating schools rose as much as 34 percent (and the percentage of 2-to-11-year-olds watching “Doug” rose “dramatically” in cities where the schools used the branded cartons).

Many more such arrangements have followed, involving Batman and the Teenage Mutant Ninja Turtles and the like. A current deal with Hasbro has Transformers exhorting kids to “Drink Milk and Roll Out!” Last year, Milk Media announced a more elaborate project called Milk Rocks! It enlists musicians and involves not only in-school promotion but also live events and a Web site jammed with songs and videos; the winner of a “Be a Milk Rock Star” contest got to join Rascal Flatts onstage.

As it happens, Milk Media was ahead of the curve in trying to pair pop culture and more healthful eating habits. In recent years there have been more experiments with kids’ pop icons and healthful foods. The F.T.C. report noted that SpongeBob has cross-promoted fruits and vegetables, and Shrek has been used to promote apples slices and milk, among other healthful options – at, uh, McDonald’s. A study released earlier this year concluded that this strategy had some effectiveness in getting kids to eat more fruits and vegetables, although that effect seemed to be short term, and some parents resisted buying cartoon-endorsed produce.

Milk has few enemies. Branding that reaches out to children inside the educational system, however, is a reliable source of outrage. When a report card is accompanied by a Happy Meal offer, or a bus ride to school includes radio ads for “90210,” it freaks people out. The advocacy group Campaign for a Commercial-Free Childhood slammed both those efforts. And Susan Linn, the C.C.F.C.’s director and the author of the recent book “The Case for Make Believe,” doesn’t sound impressed by milkvertising. “It’s yet another example of companies exploiting current concerns about children’s health and food consumption in order to market in schools,” she says.

Moreover, cajoling kids to like food and beverages that are associated with “cool” imagery amounts to training them to buy into the marketing of all the unhealthful stuff they’ll be bombarded with for the rest of their lives. The (unrelated) “Got Milk?” ad campaign leans on pop influence but exists primarily in magazines and billboards. “Given the commercialization of all of the rest of children’s lives, shouldn’t schools at least be free of advertising?” Linn asks.

But the goal of Milk Media, Long insists, is not to advance the interests of pop-culture products; the goal is to leverage their power to promote milk consumption. “You can have Shrek beating the drum for 500 different sugar products or the Transformers saying, Drink milk and roll out,’ ” he says. “I think we’re doing a lot of good.” In other words, he sees Milk Media’s approach as responding to the realities of the kid-culture marketplace as spelled out in that F.T.C. report – a place where all the popular characters advocate junk food, and Rudy the Raccoon can’t compete.