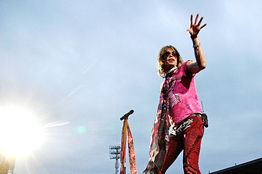 SongVest plans to auction portions of the rights
to 18 songs recorded by Garth Brooks, Aerosmith,
Cher and others. Above, Aerosmith’s Steven Tyler
on stage in July 2007.

Dream On: Own Part of a Hit Song

The digital revolution has turned recorded songs into commodities, sold for 99 cents or downloaded free and illegally. Now a start-up called SongVest Inc. is betting that the songs themselves — the music and lyrics — are still valuable to die-hard fans.

Starting next month, Madison, Wis.-based SongVest plans to auction on its Web site portions of the rights to 18 songs recorded by Garth Brooks, Aerosmith, Cher and others. People who buy the songs will receive a share of royalties the tunes generate, but they won’t have input into important matters like the songs’ use in television commercials or movies. That right will reside with who controls the publishing rights to the songs — usually a large music publisher that will continue to collect half the royalties generated by any given song.

SongVest is acting as a broker between songwriters, or their heirs, and possible buyers of the rights. When a song is sold, SongVest will collect commissions from both seller and buyer that will range from 25% to 40% of the sale price. After the sale, the company says it will handle royalty payments.

One of SongVest’s co-founders, David Prohaska, says his company is pitching the songs as the ultimate memorabilia, rather than as money-making investments. Among the tunes SongVest is selling rights in are the “(Theme from) The Monkees” and “Friends in Low Places,” which has long served as the signature anthem of Mr. Brooks. Some titles are expected to fetch more than $250,000 on the auction market.

Music-publishing transactions normally involve hundreds or thousands of songs, bundled together into “catalogs” that reliably throw off a certain amount of revenue thanks to royalties from sales, public performance and the like.

“They’re bought and sold on a pure investment basis,” says Mr. Prohaska. “What about people who really love the music?”

A test auction conducted last year garnered $25,000 for 25% interests in two songs by the ’80s Christian-metal band Stryper, Mr. Prohaska says. That is at least 10 times as much as the songs — “Always There For You” and “Keep the Fire Burning” — would be expected to fetch as part of a standard music-publishing sale, based on the songs’ typical annual earnings.

For songwriters like Mark Hudson, who has written songs for Bon Jovi, Ozzy Osbourne and Ringo Starr, the proposition represents a way to make up for revenue that has been lost amid crashing music sales.
Lately, he says: “No one is buying records. This to me is just another angle.”